Jon Auringer is originally from Lake Crystal, Minnesota.  He obtained his Associates Degree from Alexandria Technical College.  Jon started his career with the Mix County Sheriff's Office in South Dakota.  Officer Auringer also has several years serving as a Military Police Officer while on active duty.  Jon is married with with two children at home.  Most of his family still lives in the Lake Crystal area with the exception of one brother who is also in law enforcement in Mississippi.  Jon stated that he enjoys building relationships with the citizens of the community and that settling down in a small town after his military career is a nice feeling.  You can e-mail Jon at jauringer@sherburnwelcomepolice.org 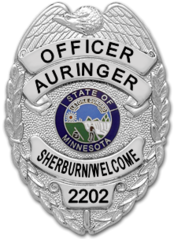 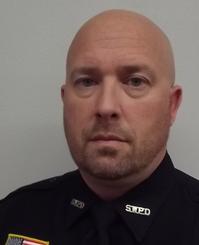 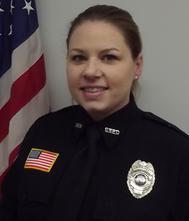 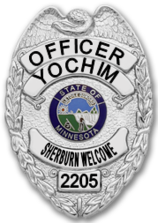 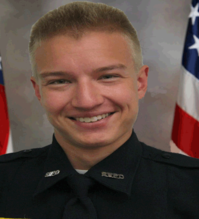 Gina Jorgensen is originally from the Ceylon area.  Gina obtained her law enforcement training at Iowa Lakes Community College and Mankato Hibbing Range for skills training.  Gina has worked for the City of Welcome as a part-time police officer until the Sherburn/Welcome Police Department was formed.  She has worked for this department ever since, becoming a full-time officer in June of 1999.  Gina has also worked part-time for the City of Truman, City of Ceylon and Martin County as a correctional officer.  Gina is married and has two children.  She enjoys working here because of the close relationships within the department as well as the community.  You can reach Gina at gjorgensen@sherburnwelcomepolice.org

Brad Hughes is originally from Fairmont, Minnesota.  He has an Associate's Degree in Law Enforcement, a Bachelor's Degree in Criminal Justice with an emphasis on Management and Administration and a Master's Degree in Public Administration.  Brad is a graduate of the Minnesota Chiefs of Police C.L.E.O. and Command Academy and completed the Management Series for Police Organizations offered through the Minnesota Bureau of Criminal Apprehension. He is a graduate of the 2013 "Leadership in Police Organizations" training which was modeled after the WestPoint Military Academy and offered through the International Association of Chiefs of Police.   Brad is also certified in Forensic Child Interviewing through CornerHouse.  Brad started his law enforcement career in Tyler, Minnesota.  He also worked for the Trimont, Truman, Sherburn, Amboy and Winnebago Police Departments.  In 1998, Brad was hired as the Chief of Police for the Sherburn/Welcome Police Department and took over the role on January 1, 1999.  Brad has three children; Derek, Logan and Taylor.  Brad enjoys working for this department because of the closeness of the communities and the relationships that have been built.  You can reach Brad at bhughes@sherburnwelcomepolice.org 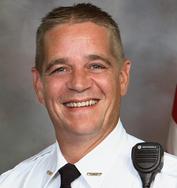 Officer Trevor Yochim is originally from Andover, Minnesota  He received his Associate in Applied Science Degree from Alexandria Technical College in 2015 and began working for this department in May of 2017.  This is Trevor's first position in law enforcement.  Trevor has two twin sisters and his family lives in various parts of the state from the metro to Sauk Centre to Morris, MN.  Trevor enjoys hunting, fishing and camping.  He also enjoys spending time with riding motorcycle with his parents.  Officer Yochim likes this area because of the small town atmosphere and the opportunity of getting to know the community that he works for.  You can reach Officer Yochim at tyochim@sherburnwelcomepolice.org

Officer Jacobson is originally from Jackson, Minnesota.  She obtained her Associates Degree in Law Enforcement from Minnesota West Community College in Worthington and began her career in Heron Lake, Minnesota.  Carolyn joined the department as a part-time officer in September, 2019.  She continues to work in Heron Lake as well as with the Jackson County Sheriffs Office as a Correctional Officer.  Carolyn has two siblings who both live in Jackson as do her parents.  In 2004, Officer Jacobson joined the army and served until she returned to Jackson in 2013.  Carolyn enjoys professionalism and comradery that the department displays and has enjoyed the time she has spent her thus far.  Carolyn stated that she takes great pride in being an officer and a veteran, but she is most proud of her title of "Mom".  You can reach officer Jacobson at cjacobson@sherburnwelcomepolice.org. 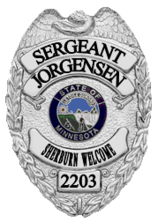 Smith is originally from Belle Plaine, Minnesota.  Nick received his degree Associates Degree from Normandale College and C.C.J.L.E.  Officer Smith's prior experience includes the St Louis Park Police and the Belle Plaine Police Department.  Nick also currently works for the State Fair Police each year during that time.  Officer Smith lives in the metro area with his wife and two children, however, they see this area as their second home since his wife is originally from the Trimont area.  Nick enjoys spending time with his children who he says keeps his life busy but full of fun.  Officer Nick enjoys working here because of he small town size and the values that are present here.  He also likes that he can spend more time on each call and not always being rushed from one call to the next.  You can reach Officer Smith at nsmith@sherburnwelcomepolice.org 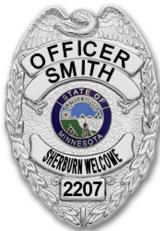 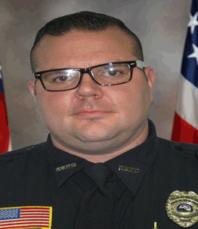 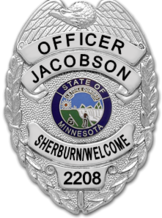